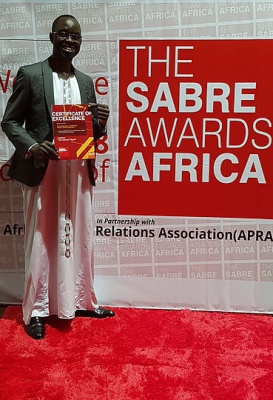 Gaborone, BOTSWANA. 10th May 2018 – For the second time in a row, brainchild Burson-Marsteller, the exclusive partner of Burson Cohn & Wolfe Africa, in Uganda, has been recognised for outstanding public relations work done for clients.

On Thursday night, brainchild Burson-Marsteller was honoured for excellent media relations work done for China Communications Construction Company (CCCC) in 2017, during the second edition of the prestigious SABRE Awards Africa which took place in Botswana, Gaborone. CCCC is the company undertaking the construction of the Kampala Entebbe Expressway and expansion of the Entebbe International Airport. brainchild BM was recognised under the Gold SABRE Award for Superior Achievement in Public Relations and was the only Ugandan firm to win at the awards.

The SABRE Awards celebrate Superior Achievement in Branding, Reputation & Engagement, have a 26-year heritage, with separate competitions in North America, EMEA, the Asia-Pacific, Latin America, and South Asia.  The winners from these regional competitions are eligible for the Global SABRE Awards, which recognize the best PR campaigns from more than 5,000 entries around the world.

Speaking at the awards ceremony, Mr. Paul Holmes, the Founder and Chair, the Holmes Group, the organiser of the awards, commended the standard of entries from the continent into the awards. “This year proved to me that the quality of work that is being done here is just as good as the quality of work that I see from the rest of the world. The best campaigns in Africa are as good as the campaigns that we see in North America, and Europe,” Mr. Holmes said.

Mr. Walter Wafula, the Business Unit head-PR, brainchild Burson-Marsteller who represented the agency at the awards expressed his gratitude to the organisers of the awards for providing a platform that allows African agencies to showcase their work to the world. “It’s a great honour for the work we do for our clients to be recognised at awards of international repute. I thank our clients for the many opportunities they give us to demonstrate the outstanding value we can deliver to their brands through our public relations work,” he said. In addition, he commended the team at brainchild Burson-Marsteller for their professional input and unwavering dedication to delivering outstanding value to clients in Uganda and the rest of the world.

At the same awards, a number of Burson Cohn & Wolfe Africa and its affiliate agencies and research partner Reputation Matters, also took home several awards from different categories and practice areas, for their outstanding work.